Macro synthetic fibres, sometimes known as ‘structural’ synthetic fibres, are made from a blend of polymers and were originally developed to provide an alternative to steel fibres in some applications. Initially they were identified as a potential alternative to steel fibres in sprayed concrete, but increasing research and development showed that they had a role to play in the design and construction of ground-supported slabs and a wide range of other applications. It has been found that macro synthetic fibres may be used with a wide range of concrete strengths.

They have a high tensile strength (say 600 MPa) and a relatively high modulus of elasticity (say 10 GPa). Unlike polypropylene ´micro´ fibres, they can significantly increase the post-cracking capacity of concrete and are starting to be used in place of steel fibres in a range of applications, including ground-supported slabs (both internal and external), sprayed concrete, small precast concrete units and composite floor slabs on steel decking.

They are particularly suitable for providing nominal reinforcement in aggressive environments, such as marine and coastal structures, as they do not suffer the problems of staining and spalling that can result from the corrosion of steel. In addition, because they are non-conducting, they have been used in tram and light railway developments. 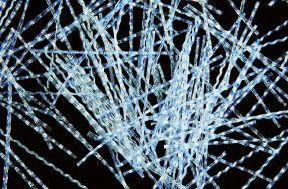 TR65 Guidance on the use of macro-synthetic fibre reinforced concrete